This map illustration spans the entire globe in a single image. In the graphic, you can find the names of the country and some of the most notable landmarks in that region. In each area, you’ll find the elements of the country that stand out. From the Parthenon in Greece and the opera house in Sydney to the Statue of Liberty in the United States and the Great Pyramids of Egypt, you’ll see them all in bright colors.

While we all celebrate our corner of the globe, this world map illustration brings the whole world into households worldwide. Notable British company Gibsons Games has created a jigsaw puzzle using the fanciful image.

Perfect for games, wall displays, classrooms, offices, and more, a graphic depiction of the world creates a terrific conversation piece.is

Artist Maria Rabinky created this beautiful world map. Using various techniques, the artist captured the essence of each corner of every continent. She then used fun designs and bird’s eye imagery to showcase the best of what each area had to offer.

With bright colors, whimsical designs, and faithful attention to geography and detail, the world map illustration not only informs but entertains. It’s easy to lose in discovery with close attention to even the smallest detail. And no matter how many times to look again, there is always something new to discover. this

Zoom in, and you will see all the details!

You may buy prints in any media here: 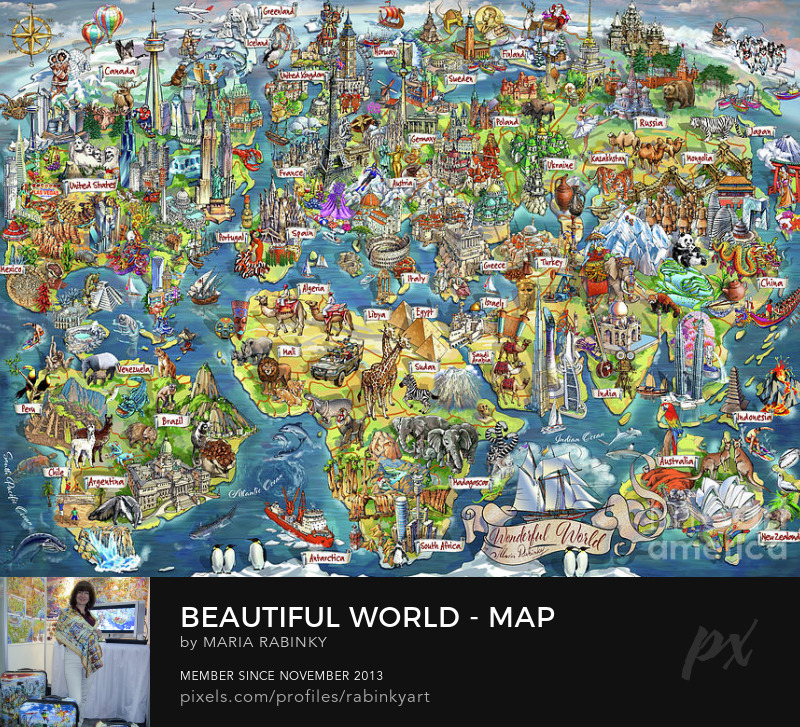